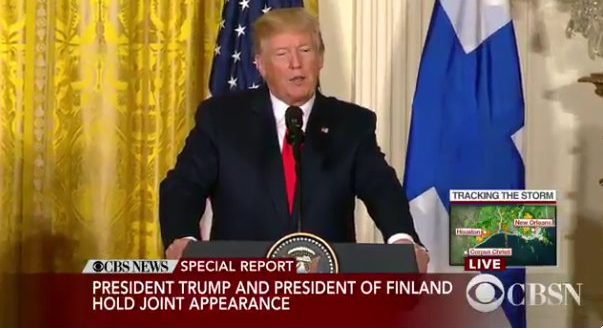 President Donald Trump on Monday defended his decision to pardon former Arizona sheriff Joe Arpaio by citing applause from one of his rallies — and then attacked former presidents Bill Clinton and Barack Obama.

“Well, a lot of people think it was the right thing to do and actually in the middle of a hurricane, even though it was a Friday evening, I assumed the ratings would be far higher than they would be normally. You know the hurricane was just starting and I put it out we were pardoning as we say Sheriff Joe.

“When I mentioned him the other night, you saw the massive crowd we had, the people went crazy,” the president said. “The place went absolutely crazy when I was in Arizona last week.”

#Harvey on the way, but Trump's focused on TV ratings for pardoning a racist who ran a concentration camp in Arizona pic.twitter.com/SpTjbuM1Tz

Trump just said he pardoned Arpaio during Hurricane Harvey because it would get better "ratings" from people following the storm on TV.

Trump says President Obama "perhaps pardoned" Chelsea Manning, whom he did not pardon.

Trump is purposefully misgendering Chelsea Manning on top of confusing a pardon with a commutation. Bigoted and stupid. https://t.co/tnKozX5IK6

"Whataboutism" all the way to the top. Trump says Arpaio? What about Marc Rich? What about Chelsea Manning? (So Arpaio is in that camp?)