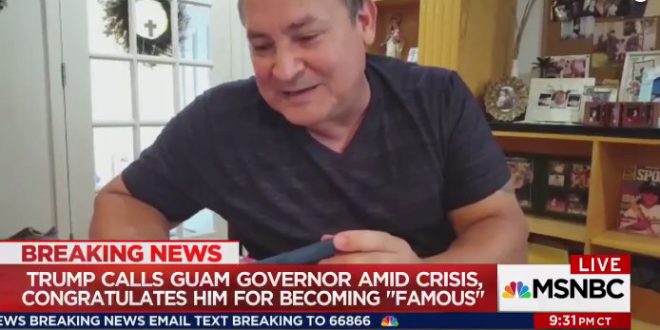 President Trump phoned the governor of Guam on Friday to assure him all the residents of the Pacific Island are safe. A video shows Gov. Eddie Baza Calvo laughing and joking with the president as they discuss everything from the readiness of the US military to tourism.

Trump later says, “We’re going to do a great job for you. All over the world they’re talking about Guam. Tourism is going to go up ten fold. It looks beautiful.” Calvo agrees. “It’s paradise.” And he told the former hotel magnate, “We have 95 percent occupancy and after all of this stuff calms down we’re going to have 110 percent occupancy.”

Now Trump calls Guam’s Governor to congratulate him on becoming famous because of North Korea. Sick obsession with notoriety. Unfit.

BREAKING: Trump calls the governor of Guam…to congratulate him for becoming “extremely famous” amidst an escalating crisis with North Korea. pic.twitter.com/VvQae43nZb

Previous BREAKING: Trump Hints At Strike On Venezuela, Says “We Have Many Options, Including A Military Option”
Next Hundreds Of Nazis March On Virginia Campus