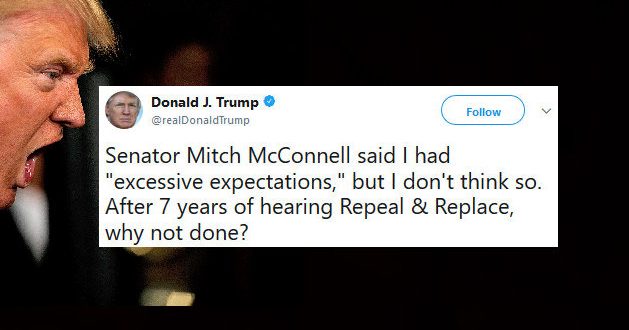 Dan Scavino, the White House director of social media, responded to McConnell’s comments that the President had “excessive expectations” of how quickly Congress operates “in a Democratic process.” Scavino, who has ardently defended the President against critics in the past, posted McConnell’s exact remarks on his personal Twitter and added his own take.

As you can, Trump has now joined in.

More excuses. @SenateMajLdr must have needed another 4 years – in addition to the 7 years — to repeal and replace Obamacare….. https://t.co/6FOVBm6BQU

Senator Mitch McConnell said I had “excessive expectations,” but I don’t think so. After 7 years of hearing Repeal & Replace, why not done?