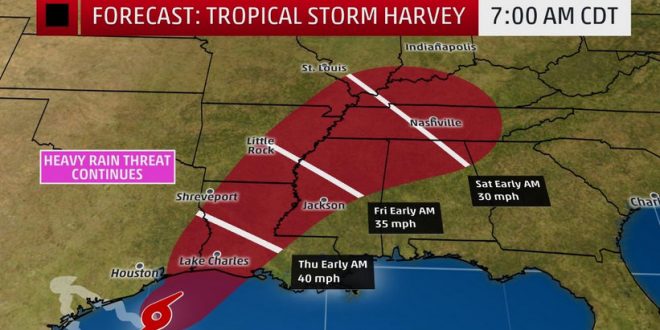 Harvey’s circulation center will crawl northward just offshore from the upper Texas coast before making a final landfall on either side of the Texas and Louisiana border on Wednesday. Later this week, Harvey’s center will then track through central Louisiana as it turns northeast.

That places Louisiana, including Baton Rouge, Lake Charles and New Orleans, in a firehose of moisture from southerly winds on the east side of the circulation for the next couple of days. Of course, the concern for New Orleans is whether any slow-moving bands of rain will stall over the city as repairs continue on pumps that help protect it from flooding.

Heavy rain will also affect northern Louisiana, particularly Wednesday and Thursday, including Shreveport and Monore. Additional rainfall totals of 5 inches or more are possible throughout Louisiana during the next couple of days. Storm totals, including the rain that has already fallen, may range 10-20 inches in much of southwest Louisiana.