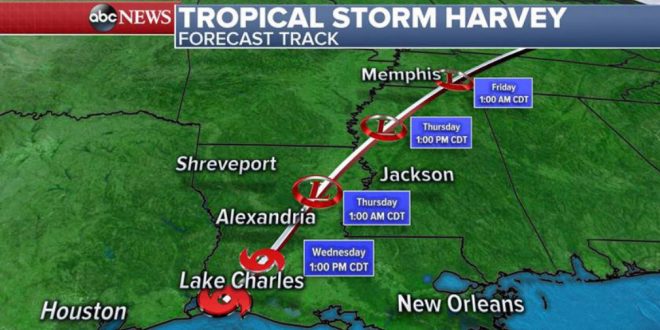 Harvey made landfall again early Wednesday, roaring ashore in western Louisiana near the border with Texas as residents in the region brace for as much as 6 to 10 inches of additional rain. “Ongoing catastrophic and life-threatening flooding will continue in southeastern Texas,” the National Hurricane Center warned.

Officials also said that while the threat of heavy rains has abated in the Houston and Galveston areas, which were deluged by record rainfall, intense and potentially deadly flooding is still a threat through the end of the week.

The tropical storm, making its third landfall since Friday, was centered about 5 miles west of Cameron, Louisiana — 30 miles east-southeast of Port Arthur, Texas, according to a 5 a.m. ET National Hurricane Center advisory.

The storm became historic Tuesday when the record for rainfall from a tropical cyclone in the continental United States was smashed at 51.88 inches in both Mont Belvieu, 35 miles east of Houston, and Cedar Bayou, east of Highlands, the National Weather Service reported.

Tropical Storm Harvey made landfall near Cameron, Louisiana. @CBS11JeffJam has more on the forecast for Harvey https://t.co/ja7vksZPla pic.twitter.com/4DrMRKttSz

WATCH: #Harvey makes another U.S. landfall in Louisiana, spreading the heavy rain with it to the east of North Texas. pic.twitter.com/UjVTg354sx