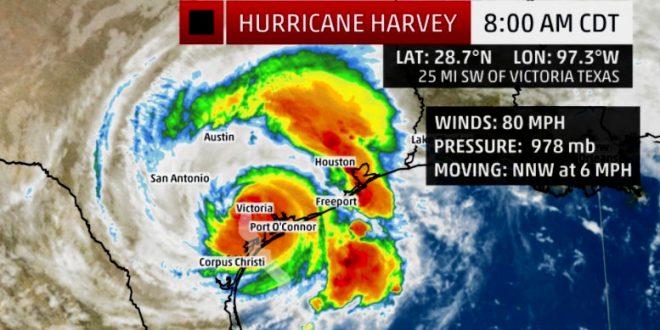 Hurricane Harvey, slowing to a Category 1 storm, moved farther inland Saturday, but forecasters warned that it continues to deliver life-threatening storm surges up to 12 feet in some areas and the danger of “catastrophic” flooding from torrential rains across the middle and upper Texas coast for several days. “Historically, water is much more a threat to life than wind,” the National Weather Service tweeted.

At 6 a.m.CDT, the National Hurricane Center clocked Harvey’s sustained wins at 85 mph, dropping it from a Category 2 storm to a Category 1 and said it would likely slow to a Tropical Storm later in the day. It was 30 miles southwest of Victoria, moving northwest at 6 mph. Although no longer a powerful Category 4 storm, Harvey is far from a spent force.

The National Weather Service says Harvey is expected to stall and spin for the next three to five days, delivering heavy rainfall for the next three days. It could also slip back into the Gulf and regenerate as a powerful storm and head up the coast toward Louisiana.

.@ChuckGrassley – got your message loud and clear. We have fantastic people on the ground, got there long before #Harvey. So far, so good!

Closely monitoring #HurricaneHarvey from Camp David. We are leaving nothing to chance. City, State and Federal Govs. working great together!

Previous Sen. John McCain: By Pardoning Joe Arpaio, Trump Has Undermined His Claim Of Respecting The Rule Of Law
Next Scamvangelicals Fail To Turn Away Hurricane Harvey