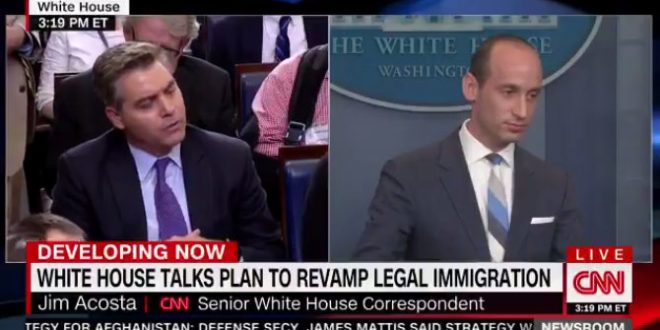 Stephen Miller: The Statue Of Liberty’s Welcome To Immigrants “Doesn’t Matter” As It Was “Added Later”

During the White House press briefing this afternoon, White House Senior Advisor Stephen Miller had a contentious exchange with CNN’s Jim Acosta, calling one of his statements “outrageous,” “ignorant,” “insulting,” and “foolish.”

Miller took the podium to discuss President Trump announcing his support for the Raise Act, which would reduce the rate of legal immigration in the United States. CNN reporter Jim Acosta asked whether the bill is in violation of the United States principle to “give me your tired, your poor, your huddled masses,” which is etched onto the Statue of Liberty. Miller dismissed this notion. “The poem that you’re referring to was added later,” Miller said, referring to the Emma Lazarus sonnet.

Later, Acosta questioned the idea of requiring immigrants to learn English before they come to the United States, asking, “Are we just going to bring in people from Great Britain and Australia.” Miller subsequently railed against Jim Acosta for this statement. “I have to honestly say, I am shocked at your statement that you think that only people from Great Britain and Australia would know English,” Miller said. “It reveals your cosmopolitan bias to a shocking agree. This is an amazing moment.”

In this exchange with @Acosta, Stephen Miller just said that the poem on the Statue of Liberty doesn't matter since it was "added later" pic.twitter.com/n4YWrIBeeC

About time someone like Stephen Miller had the political genius to take on the very overrated Statue of Liberty, who everybody hates

Given that you, Stephen Miller, think Emma Lazarus' poem on Statue of Liberty" is meaningless, you fail @POTUS' #immigration test. Leave.

MILLER: that poem on the statue of liberty was added later, it’s not legit

It's not every day when you see the White House take a shit directly on the Statue of Liberty. Well done, Stephen Miller.

Stephen Miller is a true extremist. The fact that he, Bannon, Michael Anton, Gorka & Sessions are in the federal government is chilling.

Hey Stephen Miller…Lazarus's poem was written in 1883 to try and help raise money for a pedestal for the Statue of Liberty. #Facts