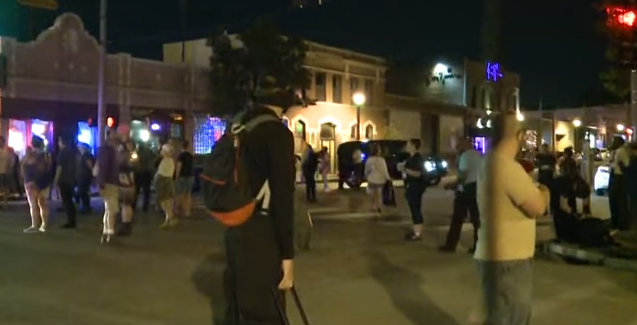 A driver in St. Louis on Wednesday was taken into custody after three protesters who blocked traffic were hit by a car during a march for a transgender woman shot and killed by police a day earlier, said police and local media.

The driver, who was not identified by police, was taken into custody for felony fleeing, a block away from where a man and two women suffered minor injuries after they were hit by his car, said Schron Jackson, a spokeswoman for the St. Louis Police Department, in a statement.

The injured people in St. Louis were taking part in a candlelight march for Kenny “Kiwi” Herring, a black transgender woman who was shot and killed by St. Louis police on Tuesday. Police said Herring attacked officers with a knife and that one officer was wounded, the St. Louis Post Dispatch reported.

No reports so far have suggested that the incident that led to the driver’s arrest at the protest had anything to do with the vigil’s purpose or with Herring. After protesters had surrounded the car, they reportedly began banging on it, and the driver then pushed through the crowd and drove away.

An alternative account of the incident from a protester who claimed that he witnessed it maintains that the driver raised both middle fingers and then accelerated into the group of protesters. Either way, police pulled the driver over and arrested him when he was just around the corner from the protest, and he was then charged with felony fleeing.

Another car just drove into a peaceful group of progressives who were holding a vigil for a dead transgender woman. We know who is to blame. pic.twitter.com/ID6QhexUqD

Pix from car that drove through protesters, car stopped was surrounded, then drove through, one person ended up on hood, only minor injuries pic.twitter.com/EYNxSJARoF