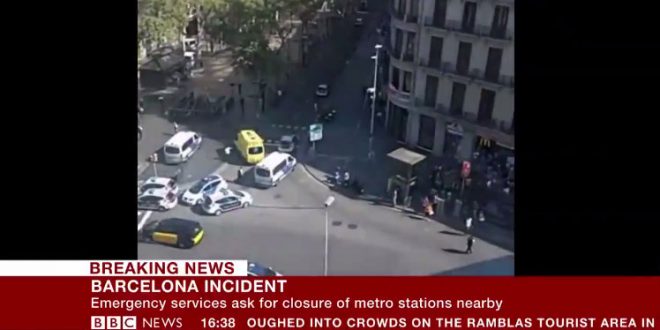 At least two people have reportedly been killed and several others are injured after a suspected terrorist crashed into a crowd of people on a pavement in a popular tourist area of Barcelona. There are also reports of a live hostage incident at a Turkish restaurant near the scene.

The vehicle hit pedestrians in Las Ramblas, a busy tree-lined promenade in the centre of the city, the Ministry of the Interior said. Barcelona police have said they believe that the attack is terror-related. “Huge collision on Las Ramblas in Barcelona by an individual driving a van, many injuries,” a statement from Catalan police added.

The first video below is live.

"We saw a lot of people running in all directions," says Barcelona witness https://t.co/2LEOTw5H17 https://t.co/fyJBgXvBw1

Reuters reporting that two armed men have entered a restaurant in an area known as La Ramblas in #Barcelona: https://t.co/dODRd3Xvzg pic.twitter.com/hfdAiJJZiT

Previous Maine Gov. Paul LePage: Taking Down Confederate Monuments Is Like Taking Down Monuments To 9/11
Next “Firefighter Prophet”: God Personally Gave Me A Secret Prayer To “Jam The Radar” Of Democrats [AUDIO]