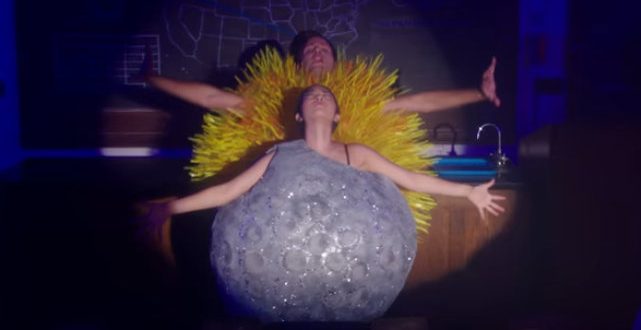 Solar Eclipse Of The Heart [VIDEO]

A whimsical parody of the Bonnie Tyler song “Total Eclipse of the Heart” highlights the Aug. 21 total solar eclipse that will be visible from the contiguous United States. Created by the Warby Parker eyeglass company, a music video for the fake song includes dancers dressed as the sun and the moon, dramatically prancing around an empty school building. The company also will give away solar viewing glasses its locations, starting Aug. 1.

The Aug. 21 eclipse, also called the Great American Solar Eclipse, will sweep across the contiguous U.S. from Oregon to South Carolina along a stretch of land about 70 miles (113 kilometers) wide. This is the first such eclipse to travel the width of the U.S. in 99 years, and not until 2024 will another total solar eclipse cross the U.S. from coast to coast.

As the moon passes in front of the sun, it will temporarily block out the sun’s disk and much of the light radiated from the body of the star. It is safe to observe this period of totally (when the solar disk is completely covered by the moon) with the naked eye. However, eclipse glasses or solar viewing glasses are required to safely view the solar eclipse whenever any part of the solar disk is visible.

Welsh singer Bonnie Tyler’s classic 1983 tune “Total Eclipse of the Heart” is popular again after 34 years due mostly to an upcoming solar eclipse. Ahead of the August 21 event in the sky, the song is experiencing a spike in popularity. “Total Eclipse of the Heart” tore up the charts 34 years ago, becoming No.1 in nine countries, including America, Ireland and South Africa. Tyler, who won a Grammy for the song, says she can’t believe how many people are seeking out her old hit.