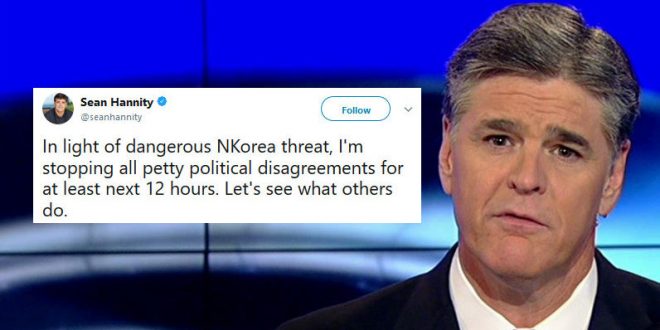 Today brought the sobering and troubling news that reclusive dictatorship North Korea has now successfully produced a miniaturized nuclear warhead that can be placed in missiles, bringing it to the brink of being a true nuclear power in the world. Well, one man has made the ultimate sacrifice for his country in terms of fighting the nuclear threat from an unstable adversary — he’s going to temporarily stop his mean tweets.

In light of dangerous NKorea threat, I’m stopping all petty political disagreements for at least next 12 hours. Let’s see what others do.

Looking forward to vexing international issue being solved in 12 hours Bc no tweets from cable host https://t.co/6L9jbJeTH2

Hannity is not-so-subtly implying that because of North Korea, we should all put aside our differences and rally behind Trump. Fuck off. https://t.co/Jdul3pY8Qx