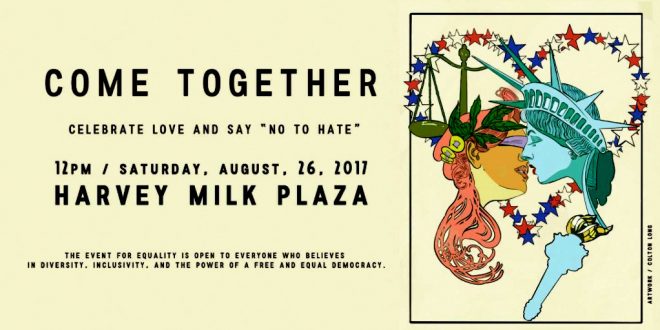 This Friday, city leaders will rally concerned citizens and host an afternoon event on the steps of City Hall to condemn hate and the presumed racist overtones of a planned rally in Crissy Field this Saturday.

The rally, which still needs a final permit from the National Park Service, has been the source of extensive hand-wringing and much bluster on social media in the Bay Area, despite denials from its organizer that it will have any neo-Nazi or white supremacist elements like those who showed up in Charlottesville. The counter-protest and rally will take place at noon on Friday on the steps of City Hall.

Meanwhile on Saturday, multiple other protest and rally events are planned in different parts of the city in order to give protesters outlets to express their anger and displeasure over the Patriot Prayer event and racist rhetoric in general on the alt-right, all without having to confront any attendees directly in Crissy Field — something that may lead to physical altercations.

SF drag queen Juanita More!, along with multiple local organizations, is hosting a Saturday afternoon event in the Castro called “Come Together,” with the tagline “Celebrate love and say no to hate.” Longtime activist Cleve Jones has already given the event his ringing endorsement, and over 1200 people have expressed interest in attending on Facebook.

The Facebook page for the Castro event is here.

San Francisco city leaders are looking to lessons from protests in Boston as they brace for a Patriot Prayer rally on Saturday. Officials are preparing for that rally to happen, whether they like it or not. San Francisco police Sgt. Michael Andraychak said, “Every available officer is expected to be working on Saturday, so no discretionary time off and days off have been canceled.” San Francisco has pretty much given up on the National Park Service denying the Patriot Prayer group a permit, out of fear of violence. Rory Little, a professor at UC Hastings said, “They probably can’t deny it. There is a First Amendment right to assemble and a First Amendment right to speak.”

Previous Scamvangelist Paula White: Demons Attack Trump Because They Fear His SCOTUS Appointments [VIDEO]
Next Dem US House Rep. Ruben Gallego: The Evidence That Trump Is A Racist Liar Is Staring Us Right In The Face