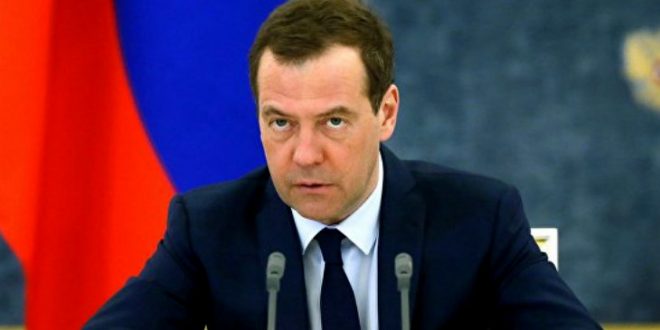 On Wednesday, President Trump signed a new sanctions bill targeting Russia. Russia has reacted with unrestrained fury. Indeed, fury is an understatement. In a Facebook post specifically referencing Trump, the Russian Prime Minister Dmitry Medvedev (No. 2 only to Putin), warned that Congress sees Trump as “an incompetent player” who must be “liquidated”.

Yes, you read that right. While Medvedev is suggesting that Congress will liquidate Trump for opposing their efforts to sanction Russia, this also reeks of a Russian warning to Trump specifically. The rest of Medvedev’s post was equally aggressive.

He suggested that Trump has shown “complete impotence, in the most humiliating manner, transferring executive powers to Congress” and that this is the “beginning of full-fledged trade war” and “the end of our hopes of improving relations with the new administration.”

The hope for improvement of our relations with the new US administration ends – @MedvedevRussiaE https://t.co/JGoGIp0evX #Sanctions pic.twitter.com/PEMRJhXxaI

Previous Stephen Miller: The Statue Of Liberty’s Welcome To Immigrants “Doesn’t Matter” As It Was “Added Later”
Next Ex-Rentboy CEO Sentenced To Six Months In Prison