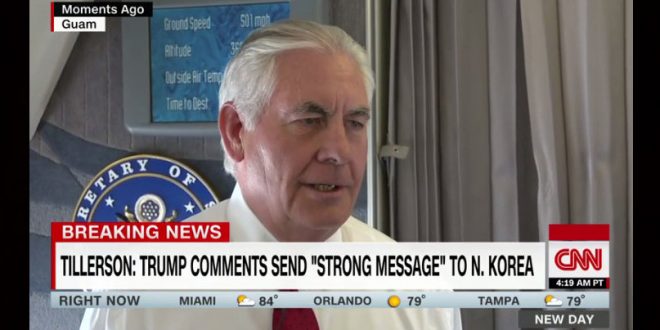 Secretary of State Rex Tillerson says he doesn’t believe there is “any imminent threat” from North Korea, including to the U.S. territory of Guam. Tillerson says that “Americans should sleep well at night.” He says that they should “have no concerns about this particular rhetoric of the last few days.”

Tillerson spoke to reporters Wednesday after President Donald Trump and North Korea traded escalating threats of “fire,” with the North saying it was examining plans for attacking Guam.

He downplayed speculation that the threats move the U.S. closer to a military option. Tillerson says nothing he’s seen or knows of in the last day dramatically changed the situation. Tillerson spoke to reporters as he flew from Malaysia to Washington, stopping in Guam to refuel.

Rex Tillerson: Trump is “sending a strong message to North Korea in language that Kim Jong Un would understand” https://t.co/40nJzRnW1B