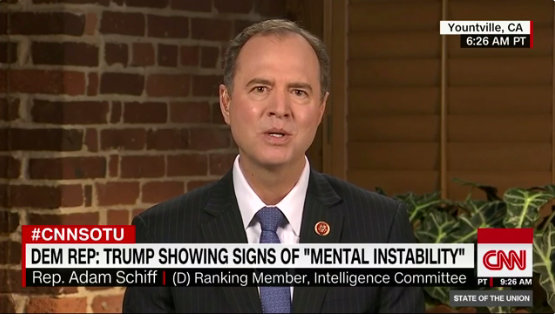 Rep. Adam B. Schiff (D-Calif.) said Sunday that he sees “some serious issues” with President Trump’s capabilities that aren’t likely to get better but that it’s premature to consider invoking a constitutional provision to force him from office.

“I certainly think that there’s an issue with the president’s capability. There’s some attribute of his character that makes him seemingly incapable of introspection and a broad understanding of what the country really needs, and I think it’s a question that people are asking, you know, ‘What is going on with this president? What can explain this kind of behavior?’” Schiff said during an appearance on CNN’s “State of the Union.”

Schiff’s comments came when he was asked by host Jake Tapper to respond to Democratic Rep. Jackie Speier’s call Tuesday to invoke the 25th Amendment, which empowers the vice president and Cabinet to remove a president who is incapable of serving.

That remedy, Schiff noted, was primarily envisioned for a president who has “some kind of physical incapacitation or serious mental illness, a breakdown.”

“We’re still far from concluding that that’s the case even though we find, many of us, his conduct anathema,” Schiff said. He added, “I don’t think we’re at a point of thinking about the 25th Amendment.”

“We have to put real constraints on this President,” says @RepAdamSchiff of Trump #CNNSOTU https://t.co/rpyM0uhctu

Previous Jerry Falwell Defends Trump On Nazi Terror Response: He Has Inside Information That I Don’t Have [VIDEO]
Next NY Times: Trump Has Summoned America’s Demons