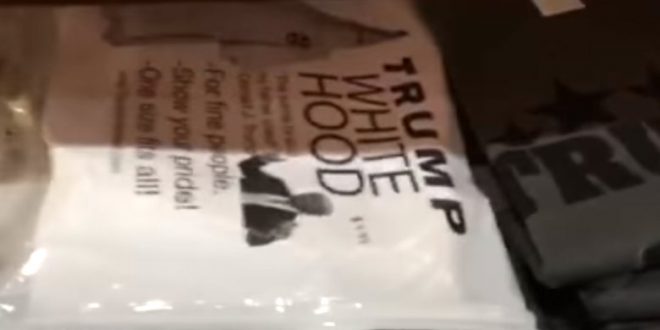 Shoppers looking for MAGA hats at Trump Tower this week may have encountered a Ku Klux Klan hood or a photo of President Putin, and asked themselves whether what they were seeing was real merchandise. On Monday afternoon, two NYC-based artists secretly slipped some items inside the merchandising outpost of the Trump Tower’s lower lobby.

Among them: A Trump-emblazoned KKK hood “for fine people,” sealed packages of pee-proof rubber sheets, and a Russian flag. In the front of the store, a postcard display featured the 45th President of the United States, Vladimir Putin, along with cards paying tribute to First Lady Ivanka Trump, and the flap of flesh near the president’s throat area, known as a Wattle.

i maybe ruined this, but for a brief moment there were KKK hoods & piss proof sheets in the trump tower gift shop https://t.co/9Y15adfVve pic.twitter.com/oxifkCedMg