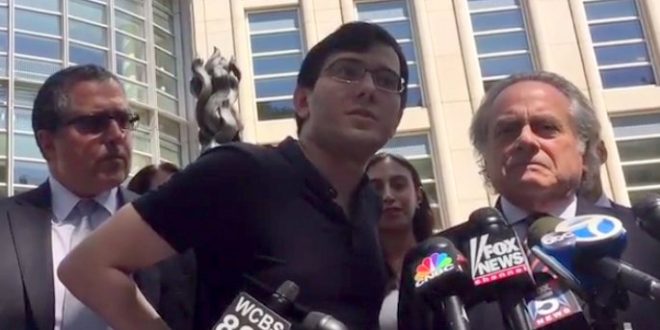 An unrepentant Pharmo Bro taunted prosecutors and predicted his odds of dodging prison time were pretty good after his Friday conviction for securities fraud and conspiracy.

“I’m one of the richest New Yorkers there is, and after today’s outcome it’s going to stay that way,” the cocky Martin Shkreli declared via livestream video from his Manhattan apartment. “And, uh, it feels pretty good.”

The reviled rich kid claimed victory despite a split decision where he was convicted of three counts and acquitted of five for deceiving investors in two failed hedge funds.

Shkreli faces 20 years in prison for his convictions on two counts of securities fraud and a single count of conspiracy, although he is likely to receive a much shorter sentence.

Previous REVEALED: House GOP Staffers Secretly Went To London To Track Down Spy Behind Pissgate Dossier
Next Unhinged NRA Spox Dana Loesch Threatens To Fist The New York Times: We Are Coming For You [VIDEO]