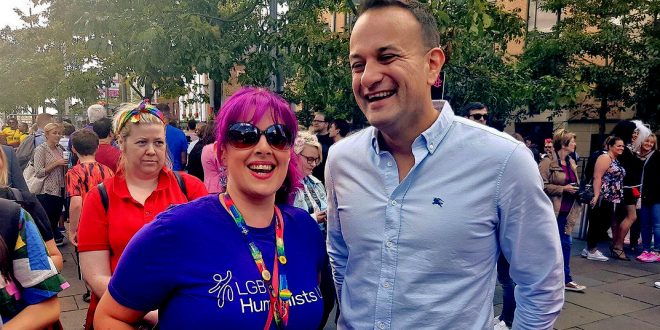 Irish Prime Minister Leo Varadkar attended a gay rights event on Saturday during his first official visit to Northern Ireland, upsetting some social conservatives in the only region of the United Kingdom where same-sex marriage is still illegal. Varadkar, who became Ireland’s first openly gay leader when he took office in June, joined activists preparing for Northern Ireland’s largest gay pride parade for a “Pride Breakfast” in a Belfast pub. He said he was unable to attend the actual parade due to a prior commitment in Dublin.

His attendance was criticized by some members of Northern Ireland’s largest party, the socially conservative Democratic Unionist Party, whose 10 seats in the British parliament prop up the government of Prime Minister Theresa May. The DUP has repeatedly blocked attempts to allow same-sex marriage despite opinion polls that indicate it is supported by a significant majority in Northern Ireland.

Leo Varadkar has said it is “only a matter of time” before same-sex marriage is introduced in Northern Ireland. The Irish prime minister was speaking at a Belfast Pride breakfast event in the city on Saturday morning. The Republic of Ireland’s first openly gay leader, said he was attending the event as a “gesture of solidarity”. Northern Ireland is the only place in the UK where a ban on same-sex marriage still exists.

Mr Varadkar told crowds outside the Northern Whig in Belfast that he was not “here to unsettle anyone”. “But I am here to state my support and my government’s support for equality before the law and individual freedom for all citizens wherever they may reside,” he said. “Difference makes us stronger and that’s something I believe in and something that I think can mark Northern Ireland out in the future.