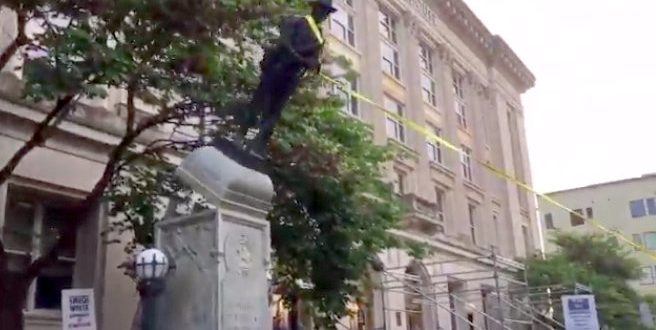 Protesters climbed a ladder, looped a rope around a Confederate statue and pulled it to the ground, smashing it, during an ‘Emergency Durham Protest’ on Main Street on Monday night.

More than 100 activists from anti-fascist and progressive groups, many who traveled to Charlottesville, Virginia, over the weekend, held the rally to demand the removal of the soldier statue in front of the old Durham County Courthouse and all Confederate statues in the state “so that no more innocent people have to be killed,” organizers said in a release.

As the statue of the soldier holding a muzzle-loading rifle and carrying a bedroll and a canteen came to the ground, members of the Durham County Sheriff’s Office videotaped the rally.

Groups at the rally included members of the Triangle People’s Assembly, Workers World Party, Industrial Workers of the World, Democratic Socialists of America and the Anti-fa movement.