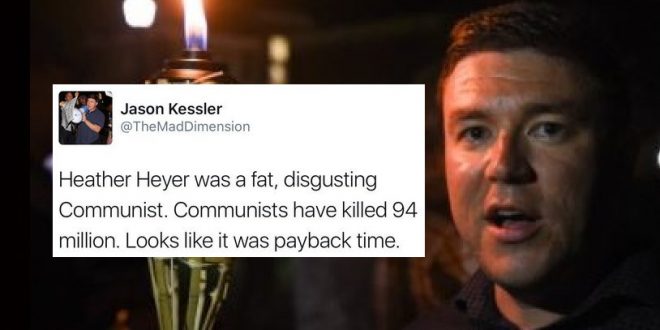 A tweet from the account of the far-right activist who organized the Charlottesville “Unite the Right” rally insulted the protester who was killed at the event, saying late Friday night that her death was “payback time.”

“Heather Heyer was a fat, disgusting Communist,” said the tweet on the account belonging to Jason Kessler . “Communists have killed 94 million. Looks like it was payback time.”

On the social media service Gab, a user purporting to be Daily Stormer staffer Andrew “Weev” Auernheimer said that he had hacked Kessler’s account, though his claim could not be immediately confirmed. Kessler did not immediately respond to an email for comment.

Kessler’s fellow Nazis are now fighting about the tweet.

This is terribly wrong and vile. We should not rejoice at the people who died in Charlottesville just because we disagree with them. https://t.co/jh2KwGI7GO

I will no longer associate w/ Jason Kessler; no one should. Heyer’s death was deeply saddening. “Payback” is a morally reprehensible idea. pic.twitter.com/MTVDL9Av3s

Assuming this is a real tweet and his account was not hacked, I will no longer attend or cover events put on by Jason Kessler. Very gross. pic.twitter.com/IyK4dyyTIn

This is getting really weird. Kessler just deleted the tweet, said he was hacked, and then deleted his tweet about being hacked. pic.twitter.com/wcXPNXepfp