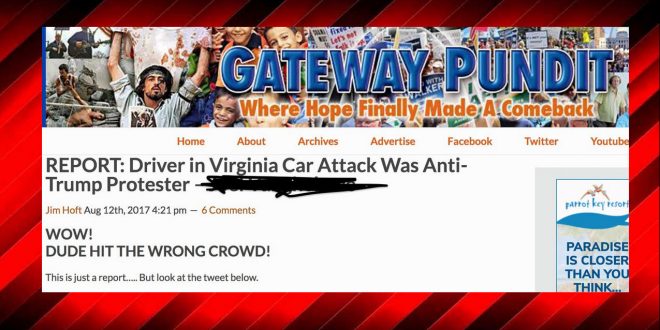 A Michigan man was falsely accused by conservative and alt-right websites as being the driver of Saturday’s deadly car attack on anti-racist protesters in central Virginia, in the hours after the tragedy, according to the man’s attorney.

The man, who the Detroit Free Press is not naming because his family reported online they have received threats, wrote on Facebook that he drives a 2009 Chevy Impala, not the vehicle involved in the fatal attack in Charlottesville, Va. “im not the one,” he wrote on Facebook, adding he was from Michigan. His Facebook page says he lives in Detroit.

The attorney who specializes in defamation cases said he planned to use the full power of the law against those who falsely claimed that his clients had anything to do with the fatal crash. “I don’t think it’s careless,” he said. “I think it was their intent to try to muddle” the truth of what happened in Charlottesville.

“REPORT: Driver in Virginia Car Attack Was Anti-Trump Protester,” Gateway Pundit blared, plus the name of the Michigan man, whose name The Daily Beast is withholding. “WOW! DUDE HIT THE WRONG CROWD,” the subheadline read. The post was deleted with no retraction.

“BREAKING: #Charlottesville Car Terrorist Is Anti-Trump, Open Borders Druggie,” reported GotNews, a website owned by far-right provocateur Chuck Johnson. “[Name redacted] likes taking drugs and getting stoned, a look at his social media shows. What he under the influence when he crashed into the crowd at Charlottesville?” the post read. That post has since been removed.

.@gatewaypundit ran an article accusing the wrong guy of being the car suspect. Said he was “BLM/Antifa.” (screenshot w/ wrong name blocked) pic.twitter.com/1vijXAmjDa