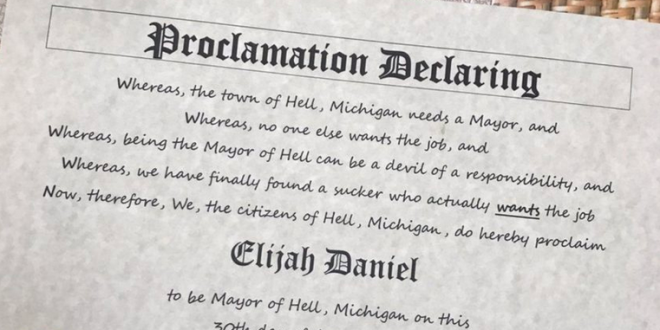 “Make Hell gay again.” That was the message from the newly-appointed-and-then-impeached “mayor of the small, unincorporated community in Michigan’s Livingston County. Confused? Let’s explain further.

In a series of comical Tweets sent out on Wednesday, Aug. 30, comedian and internet personality Elijah Daniel explained that he was named the legal mayor of Hell, Michigan when he was presented a proclamation signed by former “mayor” Odum Plenty.

As part of his first day in the office, Daniel quickly banned all straight people from entering Hell. “Growing up, I was always told that homosexuals would go to Hell,” the notice reads. “Now, the heterosexuals are trying to take this from us, too. As of today, I am establishing new vetting measures to keep radical heterosexuals out of this town.”

As acting mayor of Hell, Michigan I hearby ban all heterosexuals from entering our town. pic.twitter.com/uDuGWFATmS

I love straights, but my #1 priority is the safety of my town. Until the heterosexual threat has been reviewed we cannot allow them to enter

Although I enjoyed my time as mayor, I’ve been informed that I’ve been impeached as mayor of Hell. This will not effect my presidential run.

Being impeached was fun @realDonaldTrump, you should try it.