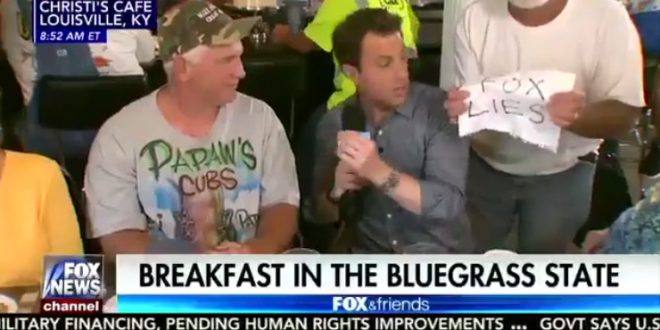 In the final moments of Wednesday’s Fox & Friend program, the morning crew tossed to reporter Todd Piro, who was speaking to patrons at a diner in Louisville, Kentucky. “Let’s get right to the debate,” Piro said. “Jefferson County, where we are, highly Democrat. Bullitt County, right across the way here, heavy Republican.”

Turning to a man named Keith, Piro began to ask a question of a “Trump voter” — but he was quickly interrupted by a man who approached from behind with a sign reading “Fox Lies.” “Alright, alright,” Piro replied, pushing the man’s sign out of view of the camera. “We’re going to wrap this up and we’re going to go on off to commercial.”

Not all heroes wear capes. pic.twitter.com/I9Ny64xWRe