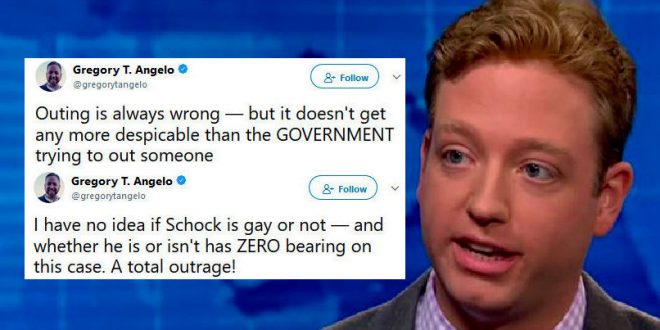 On Tuesday, defense attorneys for former GOP House Rep. Aaron Schock accused the federal government of prosecutorial misconduct on several grounds, including interviewing witnesses as to whether they know if Schock is gay or not.

Schock has been charged with 24 criminal counts, including misuse of government funds, and investigators are trying to determine, among other things, if his traveling companions were legitimate staffers or, you know, his boyfriend(s).

That angle of the probe has infuriated Log Cabin Republicans head Gregory T. Angelo, who says that “outing is always wrong!” Actually, outing is TOTALLY fucking called for whether you are an anti-gay activist or an elected official who repeatedly voted against the civil rights of his own people.

Outing is always wrong — but it doesn’t get any more despicable than the GOVERNMENT trying to out someone https://t.co/ruX1g5iosY

I have no idea if Schock is gay or not — and whether he is or isn’t has ZERO bearing on this case. A total outrage! https://t.co/o1DaPzFTNU