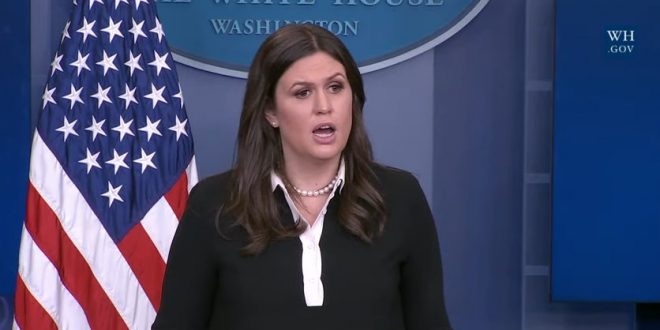 After an extended hiatus from the White House Press Room, Sarah Huckabee Sanders will appear at the podium today in order to hold an on-camera briefing. The event is scheduled to begin at 2:30 p.m. EST.

Today’s briefing will be the first since the nation was shaken by the racially-charged events of Charlottesville. The issue has become a major source of controversy for President Trump, due to his divisive attempts to move past the violence that ended Heather Heyer‘s life.

There is a high probability that Sanders will face questions about how Trump gave Charlottesville new breath on Tuesday when he hammered the media for criticizing his remarks and questioning whether he did enough to condemn white supremacists.

Previous God Menaces Texas With Strongest Hurricane In Over A Decade Due To Failure To Pass Anti-Trans Bill [VIDEO]
Next VIRGINIA: Court Denies Bail For The Weeping Nazi