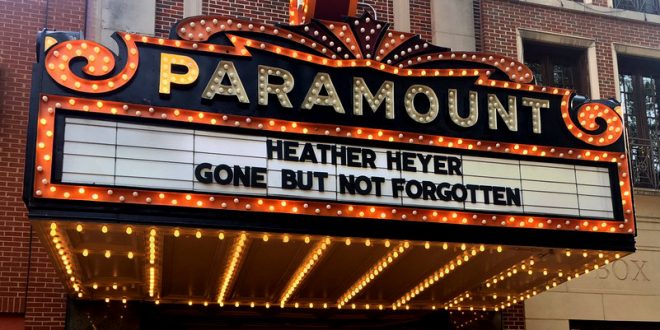 Starting at 11am. USA Today reports:

Family, friends, supporters and other mourners were gathering in Charlottesville Wednesday to honor a 32-year-old legal assistant who was killed when a car plowed into a crowd of people who had turned out to protest a white supremacist rally.

The vigil has become a symbol of the community’s effort to stand up to the alt-right forces that picked Charlottesville to spread their white supremacist message. The Paramount Theater, which is hosting the memorial service, said it had made arrangements for overflow attendees to view the vigil through a livestream.

The theater said on its website that signs and firearms were prohibited at the service and that all bags were subject to search. Attendees were asked to wear purple, Heyer’s favorite color, in her memory.

Three officers guard the entrance to the Paramount Theater, where Heather Heyer’s memorial service is schedule to start at 11 a.m. pic.twitter.com/p1VBwn0ufX