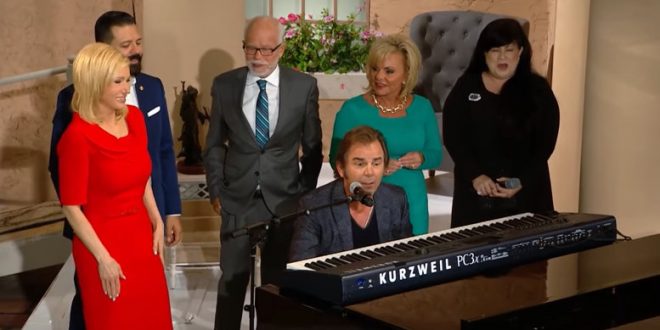 Jonathan Cain—songwriter and keyboard player for the band Journey—revealed on The Jim Bakker Show the Christian roots of the band’s biggest hit. His father imparted some Christian wisdom to him, including the phrase “Don’t Stop Believing.” He shares his testimony and performs the song live in this clip.

Cain is married to Trump “spiritual advisor” and scamvangelist Paula White (in the red dress), who recently earned national headlines for declaring that opposing Donald Trump is opposing “the hand of God,” and that “demons” attack Trump because they fear his Supreme Court appointments. White sells “resurrection seeds” for $1144, a price she claims was personally set by God.

According to Wikipedia, Don’t Stop Believin’ has sold more digital downloads than any single released in the 20th century. The track peaked on Billboard’s pop singles chart at #6 in 1981. Cain is listed as one of the song’s three co-writers, along with Steve Perry and Neal Schon. Last year Cain released a solo gospel album titled What God Wants To Hear.

Previous KENTUCKY: White Nationalist Groups Plan “Flash” Rally So That Counter-Protesters Have No Time To Organize
Next Scott Baio Doesn’t “Give A Shit” If He Ever Works Again After Sharing False Flag Claim On Nazi Terror Attack