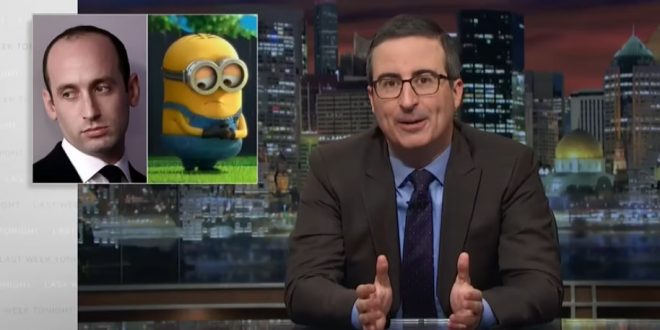 Oliver seemed shocked to learn Miller is 31 human years old. He is, Oliver pointed out, the same age as the Olsen twins, who Oliver continues to insist on referring to in the singular because he’s convinced they are just one person.

Oliver also played for his viewers the video that’s been circulating of Miller at Santa Monica High School in which he’s campaigning for some position or another on a platform of being sick and tired of being told to pick up his trash “when we have plenty of janitors who are paid to do it for us.”

Calling him “one of the most revolting humans [Minions] I have ever seen,” Oliver nonetheless felt Miller, “an entitled elitist asshole who refuses to take responsibility for the messes he makes” and who can somehow manage to pick a fight with a statue, is, in fact the perfect spokesman for the Trump administration.

Previous Trump: My Base Is More Loyal Than Ever
Next AUSTRALIA: Government To Press For Postal Plebiscite On Marriage After Bid For Conscience Vote Fails