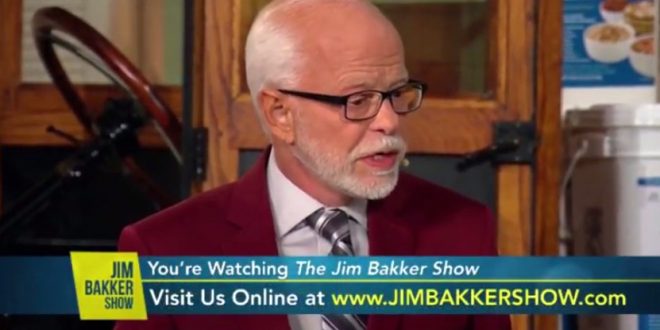 Jim Bakker Was Invited To The White House [VIDEO]

Jim Bakker, the disgraced former televangelist who reinvented himself as an End Times prepper pitchman following his time in prison, was among the dozens of evangelical leaders who were brought to the White House recently to meet with members of President Trump’s administration.

Bakker revealed on his program today that he and his wife Lori were in the White House on the day that Anthony Scaramucci was fired from his short stint as White House communications director, noting that it was not a coincidence that Scaramucci was let go at the moment when George O. Wood, who heads the General Council of the Assemblies of God, spoke out against “unnecessary swearing” during a meeting with White House staff.

According to the Bakkers, Trump is eager to hear from right-wing Christian leaders and hopes to use them to spread his message to their audiences. Bakker said that pastors and Christian leaders must send letters of support to Trump, who “will read every word of it because he’s looking for the pulse of what God is doing in our country.”

God is going to murder everyone because he loves you. So buy my pancakes. pic.twitter.com/aDA7lMrbym

But it was sex, as much as money, that brought them to ruin. Jim and Tammy Faye, to all appearances the country’s most Christian couple, were in fact swimming in a cesspool of sin.

Austin Miles, a professional clown, later claimed he walked in on Jim Bakker and three younger males “playing with each other” in the sauna at the Heritage Village complex. According to Miles, one of the men was stretched naked on a table while Bakker administered an intimate massage.

The clown beat a retreat, but not before Tammy Faye stormed inside. Pounding on the door of the steam room, she screamed at her husband to come out before collapsing in sobs. The door stayed shut.