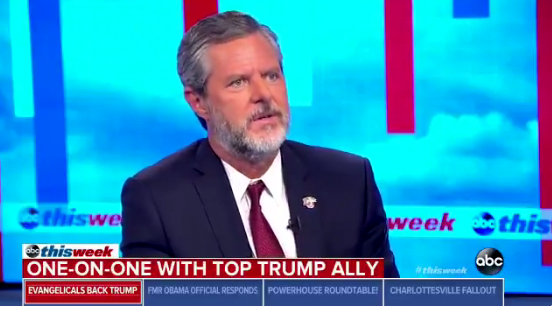 Jerry Falwell Defends Trump On Nazi Terror Response: He Has Inside Information That I Don’t Have [VIDEO]

Jerry Falwell Jr., one of President Trump’s most ardent evangelical supporters, said Sunday that the president “left the door open” to calling the recent violence in Charlottesville, Va. “domestic terrorism.”

Falwell, on ABC’s “This Week,” defended Trump for blaming violence on “many sides” in the incident, saying Trump “has inside information I don’t have.” Trump “doesn’t say what’s politically correct, he says what’s in his heart…and sometimes that gets him in trouble,” Falwell said. “He’s not focus grouping every word he says.”

He went on to say Trump shows more “national leadership” and “substance over form” than the U.S. has seen “in a long time.”

.@JerryFalwellJr on Pres. Trump’s “both sides” comments in response to Charlottesville rally: “He has inside information I don’t have.” pic.twitter.com/i114BnkLz7

One member of Trump's evangelical advisory board has quit. The rest has been largely silent https://t.co/hjNGjUM6rX pic.twitter.com/PoIBTeVtvJ

Previous REPORT: White House Insiders Say They Stay To Save Country, “You Have No Idea The Crazy Stuff We Kill”
Next Adam Schiff: It’s Premature To Talk About Removing Trump For Being Mentally Incapacitated [VIDEO]