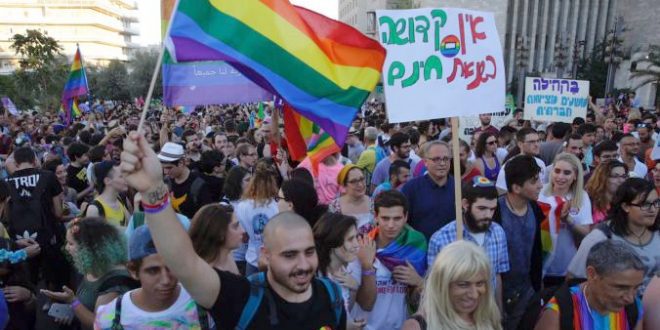 Thousands of people marched through central Jerusalem under heavy security on Thursday in the city’s 16th annual pride parade. The annual march was the scene of a deadly attack two years ago, and often draws protests from the far-right and ultra-Orthodox community.

Police said that 12 people had been detained for questioning. They were suspected of “intent to disrupt and cause harm during the event. One of them was found in possession of a knife,” police said in a tweet. Israel Police Commissioner Roni Alsheikh was at the parade to oversee the heavy security measures, which included cameras and aerial surveillance.

Marching past the spot where Shira Banki was stabbed to death in 2015, marchers stopped to lay flowers and hold a moment of silence. Nearby, some 50 protesters from the far-right Lehava organization held a counter-demonstration, surrounded by a tight police cordon.

Jerusalem Gay Pride parade: Police detained 12 people suspected of trying to interrupt the march. One of the suspects had a knife – Police pic.twitter.com/iQ2XuHsWBO

Prayers in memory of Shira Banki before the start of #JerusalemPride pic.twitter.com/azZbG0DFIV