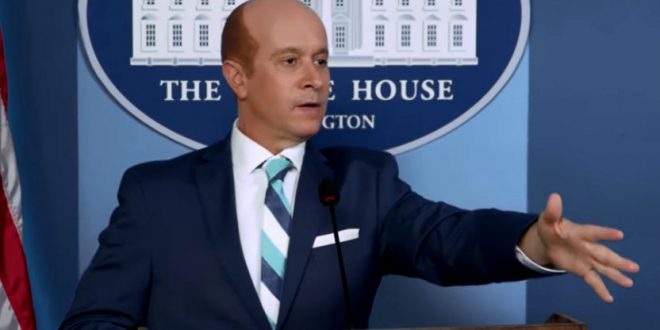 Pauly Shore plays Trump policy aide Stephen Miller in a Funny or Die sketch that mocks Miller’s White House briefing room showdown with a reporter over the Statue of Liberty and the poem “The New Colossus.”

In the sketch, which utilizes footage from that actual argument with CNN reporter Jim Acosta, Shore’s Miller presents other revisionist “facts” about the Statue of Liberty, including informing reporters that Lady Liberty is holding an iPad.

“Why don’t we talk a little history? In the year 2000, did you know a mutant known as Wolverine scaled the Statue of Liberty in a climatic showdown with Sabretooth,” “Miller” asked. “Or when the Ghostbusters brought the Lady Liberty to life with the power of Ectoplasm? Was that violating – in your opinion Jim Acosta – the Statue of Liberty law of the land?”

The clip below already has 300K views.