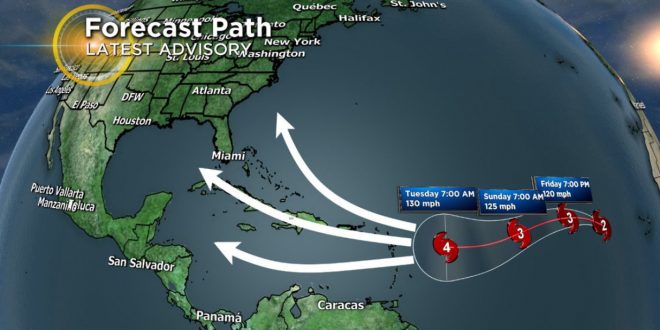 Tropical Storm Irma is now a hurricane in the open Atlantic and is expected to strengthen into a category 4 storm as it treks west. As of late Thursday morning, Irma was a category 2 storm packing sustained winds of 100 mph and was located more than 3,000 miles away from Florida. The storm is headed west toward the Leeward Islands.

U.S. and European computer models show Irma heading in different directions. “The American models take it to the Carolinas by next Sunday (Sept. 10). The European models have it going to Cuba and possibly threatening South Florida,” News 6 meteorologist Troy Bridges said. “It’s just too early to tell.”

Irma is expected to grow into a category 3 hurricane with 120 mph winds by Friday. The system is forecasted to become a category 4 storm with 130 mph winds by Tuesday. On average about 35 percent of storms develop during the month of September, with a gradual decrease October and November.