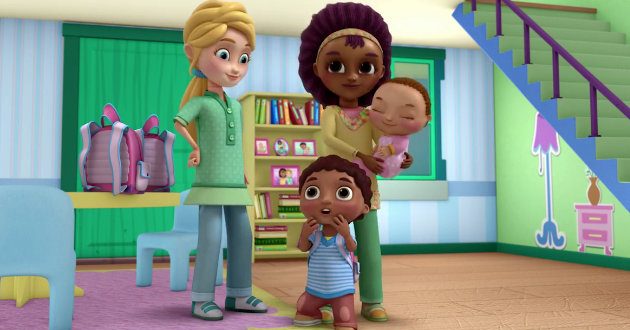 A few days ago One Million Moms had yet another meltdown over a positive portrayal of a gay family in the media, this time aiming their fury at the Disney Channel. Today we get a look at the show, which aired yesterday.

This weekend, Disney Junior and The Disney Channel broke new ground on the successful animated children’s television series Doc McStuffins, airing an episode featuring two moms as the heads of a household that learns the importance of putting a plan in place for unexpected emergencies.

The episode entitled, “The Emergency Plan,” finds the two doll moms, voiced by out actors Wanda Sykes and Portia de Rossi, caught unprepared when a toy dragon causes an “earthquake” by jumping up an down. The family becomes separated, and Doc reunites them and shows them how to make emergency kits.

“Children like mine deserve the chance to see their families reflected on TV, and this episode does just that in a beautiful and positive way,” said Sarah Kate Ellis, President and CEO of GLAAD, the world’s largest LGBTQ media advocacy organization. “Shows like this reflect our real world, and today that includes the many children being raised by gay and lesbian parents who are all going to celebrate this story.”

So proud to be in this episode. Love is love! #Docmcstuffins https://t.co/WmvWXURnZE