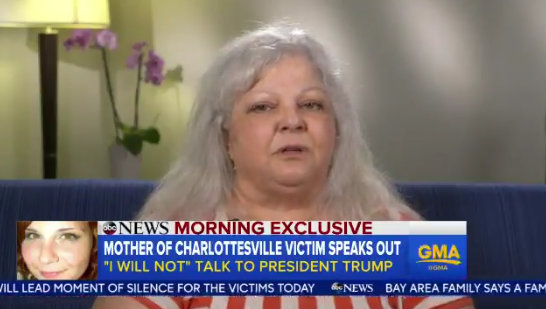 The mother of the 32-year-old woman killed amid the racially charged violence in Charlottesville, Va. on Saturday said on Friday she has not spoken with President Trump and she is not planning to. ABC News’ Robin Roberts asked Susan Bro, who is the mother of Heather Heyer, if she has spoken to the president in the wake of her daughter’s death.

“I have not and now I will not,” Bro said on “Good Morning America,” adding she had received dozens of missed calls from the White House on Wednesday, which was the day of her daughter’s funeral.

“I’m not talking to the president now. I’m sorry, after what he said about my child. It’s not that I saw somebody else’s tweets about him. I saw an actual clip of him at a press conference equating the protesters, like Ms. Heyer, with the KKK and the white supremacists,” she said.

WATCH: “You can’t wash this one away by shaking my hand and saying I’m sorry.” Mother of Charlottesville victim speaks out. pic.twitter.com/vNiGNgFERi