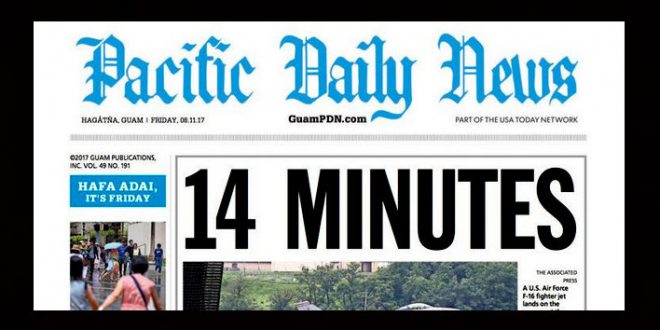 If North Korea fires missiles toward Guam, the deadly weapons would take about 14 minutes to reach the island, said Guam Homeland Security spokeswoman Jenna Gaminde. She said residents would be immediately notified by the 15 All-Hazards Alert Warning System sirens, located in low-lying areas throughout the island.

North Korea announced Thursday that the nation has a detailed plan for a missile strike near Guam using four intermediate-range ballistic rockets.

“Our office will be notified from the military and will utilize all forms of mass communication to get the message out to the public,” Gaminde said. Local media, village mayors and social media would be used to disseminate information, she said. Gaminde urged island residents to tune into local media for further instructions if sirens began sounding.

Guam’s newspaper: It would take 14 minutes for a missile from North Korea to hit the Pacific island pic.twitter.com/BO7tNmKCkf