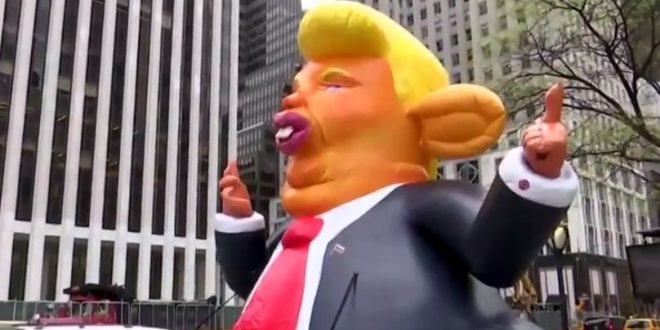 New York City’s rats have gotten much bigger … and blonde. A giant inflatable of President Trump, in the style of labor unions’ blowup rodents, is greeting Midtown residents and tourists Monday afternoon at Fifth Ave. and 59th St.

The grotesque model of Trump was claimed by gallery Bravin Lee, who said that the inflatable rat is “an enduring sign of resistance and ridicule.”

“I was always passing by these non-union construction sites on my bike and I saw these inflatable rats. I was amazed at how effective they were. I marveled at how disgusting they were,” gallery owner John Post Lee told the Daily News.

With the President scheduled to return to Midtown today, a giant inflatable #TrumpRat has arrived at 59th and 5th. pic.twitter.com/HQNRDNuJb7