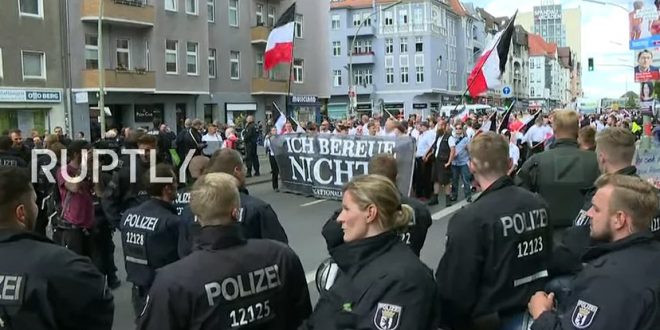 Neo-Nazis marched in the streets of Berlin on Saturday as counter-protesters assembled to meet them, a week after a white supremacist rally turned deadly in Charlottesville, Virginia. Helmeted police in riot gear stood guard as right-wing demonstrators converged on the German capital to mark the 30th anniversary of the death of Rudolf Hess, Adolf Hitler’s deputy.

Convicted at the Nuremberg war crimes trials, Hess served a life sentence at Spandau Prison and was the sole inmate there from 1966 until his death in 1987. Nazi sympathizers revere Hess because he never renounced his beliefs decades after the fall of the Third Reich.

One of Saturday’s banners read, “I do not regret anything,” Hess’ last words before his sentencing at Nuremberg. Another banner disputed the account that Hess committed suicide at age 93: “It was murder. Enough with the suicide lie.”

German law strictly forbids displaying any Nazi symbols. Instead, today’s Nazis waved the imperial German flag. The clip below is live at this writing and you can rewind the video.