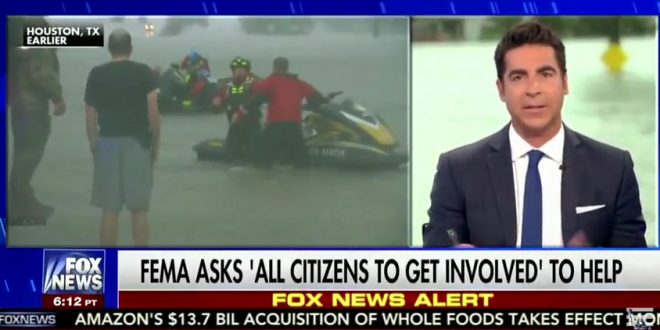 Fox News host Jesse Watters fell for a fake photo of a shark swimming down a highway that circulated through social media Monday alongside legitimate images of flooding from Tropical Storm Harvey.

Watters was discussing the extent of the “biblical things” that he saw on social media about the storm on “The Five” Monday night, including alligators and “sharks.”

“I’ve seen some amazing things out there just looking at television,” Watters said. “Alligators on people’s back door steps. I saw a shark on a highway swimming in the water.”

“There’s some really weird biblical things that are going on down there in Houston. I can’t imagine how I would be experiencing that as a guy from the northeast but I think Texas has it figured out.”

Believe it or not, this is a shark on the freeway in Houston, Texas. #HurricaneHarvy pic.twitter.com/ANkEiEQ3Y6

That photo of a shark swimming on a flooded highway in Houston? It’s a fake, and a very old one too. https://t.co/oSLFu5yYyk pic.twitter.com/90HyLqzyUP