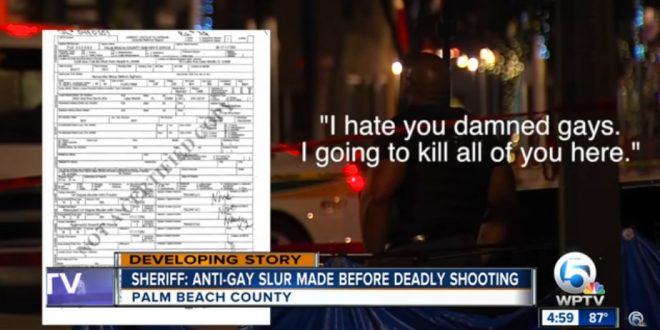 The words spoken before a deadly shooting in Lake Worth could reveal the suspected shooter’s motive. The arrest report for Nelson Hernandez Mena, 48, states witnesses heard Hernandez angrily utter anti-gay statements just before one man was killed and a second person was injured. The mother of the 22-year-old man who was shot and killed said her son was gunned down while he was trying to protect his cousin who was being targeted for being gay.

Juan Cruz, 22, and his friends and cousin were at Las Flores Restaurant on Lake Avenue across from Lake Worth City Hall on Saturday night. The police report said that a witness saw Hernandez Mena looking over at Cruz’s group angrily. When the restaurant closed and everyone went outside, a witness said Hernandez Mena said: “If we were in my country, I’d kill all of you like rats.” The report also said a witness heard Hernandez Mena say: “I hate you damned gays, I’m going to kill you all here,” before he allegedly pulled a gun from his waistband.

Previous VIRGINIA: Hundreds Of White Supremacists And Nazis To Rally At Park Once Named For Robert E. Lee
Next Colbert Tees Off On Eric Bolling: How Do You Forget Sending Someone Your Bits And Pieces? [VIDEO]