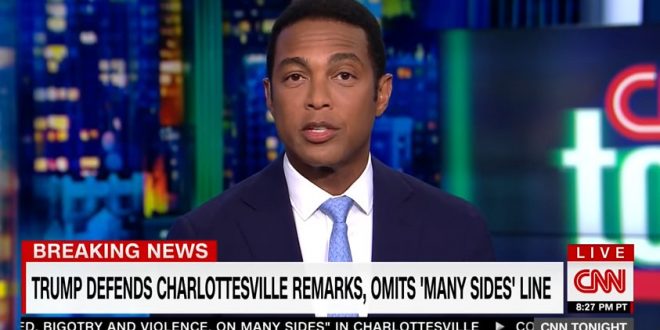 “I’m just going to speak from the heart here. What we’ve witnessed is a total eclipse of the facts—someone who came out onstage and lied directly to the American people and left things out that he said in an attempt to rewrite history, especially when it comes to Charlottesville. He’s unhinged. It’s embarrassing. I don’t mean for us, the media, because he went after us—but for the country.

“This is who we elected president of the United States, a man who’s so petty he has to go after people who he deems to be his enemies like an imaginary friend of a six-year-old? His speech was without thought. It was without reason. It was devoid of facts. It was devoid of wisdom. There was no gravitas. There was no sanity there. He was like a child blaming a sibling on something else. ‘He did it. I didn’t do it.’

“He certainly opened up the race wounds from Charlottesville, a man clearly wounded by the rational people who are abandoning him in droves, meaning those business people and the people in Washington now who are questioning his fitness for office and whether he is stable—a man backed into a corner, it seems, by circumstances beyond his control and beyond his understanding.” – CNN host Don Lemon, speaking moments of Trump’s speech last night.