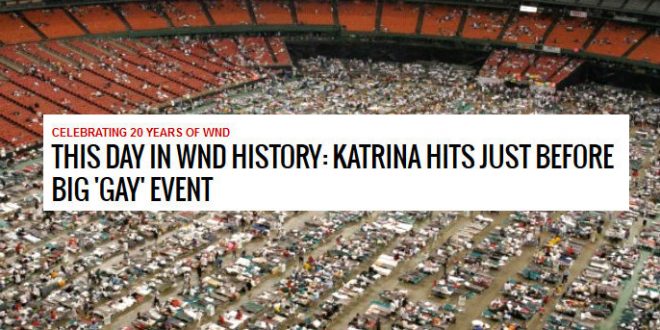 Aug 31, 2005: While stunned Americans were still trying to fathom the destruction Katrina brought to New Orleans, one Christian organization saw a divine hand.

The hurricane walloped the city just two days before the annual homosexual “Southern Decadence” festival was to begin, forcing its cancellation – an act characterized by the Philadelphia Christian organization Repent America as God’s work.

“Parades and non-stop parties aside, Southern Decadence may be most famous (or infamous) for the displays of naked flesh which characterize the event,” read one description of the event that drew 125,000 the previous year.

“Although the loss of lives is deeply saddening, this act of God destroyed a wicked city,” stated Repent America director Michael Marcavage in a statement. “From ‘Girls Gone Wild’ to ‘Southern Decadence,’ New Orleans was a city that opened its doors wide open to the public celebration of sin. May it never be the same.”

Previous Death To Gays Pastor: God Sent Harvey To Punish Texas For Failing To Pass Its Anti-Trans Bathroom Bill [AUDIO]
Next US Expels Russian Diplomats In NYC, DC, And SF