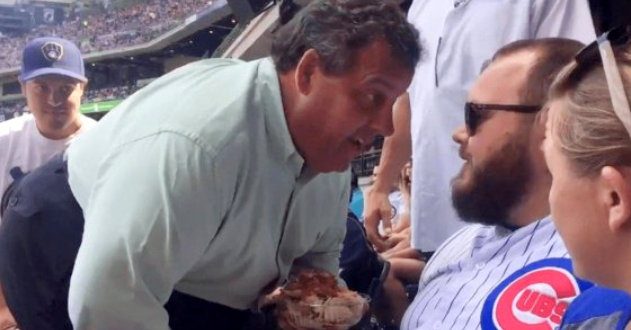 Chris Christie: That Heckling Cubs Fan Is Just Lucky I Didn’t Dump My Nachos On Him, Which Was An Option

Chris Christie reminded people Wednesday that he didn’t dump nachos on a Chicago Cubs fan who heckled him. Speaking at an unrelated event in Trenton, the Republican governor said three days after he confronted a heckler at a Milwaukee Brewers-Cubs game that he won’t quit attending baseball games.

“I didn’t dump the nachos on him or anything, which was an option,” Christie said. “No, I’m not swearing off baseball games in any way.” Christie was carrying nachos when he was caught on video calling the fan, Brad Joseph, a “big shot” during Sunday’s game. Christie said Joseph heckled him once, and that he confronted him after a second jibe.