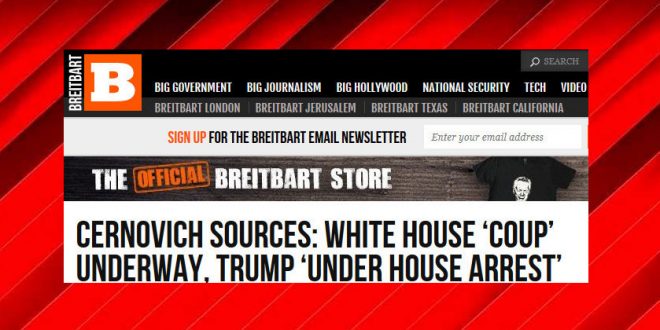 Pizzagate nutjob says so! They write:

“There’s some pretty explosive stuff in your report,” said Alex Marlow referencing Cernovich’s recent Trump Dispatches, “and so I just wanted to unpack some of it with you, the first place where it starts in your dispatch is that Trump is on house arrest and you cite John Bolton who people thought was under consideration for National Security Advisor, for Secretary of State who can’t even have access to the President right now and this is a pretty big departure from campaign trail Trump.”

“Exactly, so I’d heard from people that Trump is on house arrest,” replied Mike Cernovich, “I thought ‘oh c’mon, the President of the United States, that’s the weirdest thing I’ve ever heard’, but I kept digging into it and I kept hearing the same thing over and over again and then, of course, John Bolton wrote his column for National Review and he’s begging people to retweet it, he said ‘this is the only way the President is gonna see it,’ and I’ll say Alex, I don’t really understand, how can Trump not see who he wants to see? This is something I don’t really fully comprehend within the White House. I have talked to a lot of people, it’s a very weird situation.”

To recap: the Pizzagate guy is telling Breitbart that there’s a “coup” underway against Trump who’s under “house arrest”. Sounds legit!

Breitbart melts down, worries Trump is “under house arrest” https://t.co/Iv0JVo6rvF via @shareblue

Not gonna link it, but Breitbart is peddling a story from Mike Cernovich about how Trump “may be under house arrest” after “maybe a coup”:.

Lol. Cernovich “reporting” that Trump is under house arrest. He and Breitbart giving tinfoil hat people a bad rep. https://t.co/Z0kcJt6xVu

Previous US Expels Russian Diplomats In NYC, DC, And SF
Next Steve Mnuchin Backs Away From Plan To Replace Andrew Jackson With Harriet Tubman On The $20 Bill