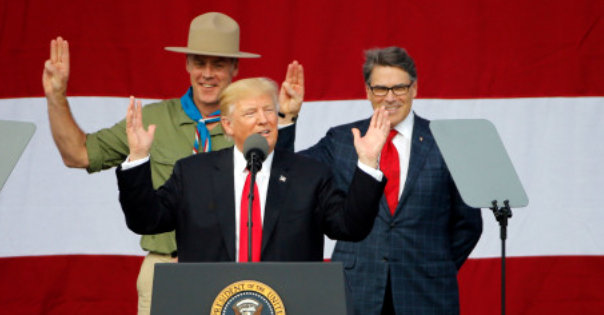 Boy Scouts: Trump Lied About His Speech To Us

President Donald Trump told the Wall Street Journal that after his controversial speech at the Boy Scouts National Jamboree in West Virginia, the head of the Boy Scouts called him and told him it was “the greatest speech that was ever made to them.” But the organization told TIME they are unaware of any call from national leadership placed to the White House.

“The Chief Scout Executive’s message to the Scouting community speaks for itself,” the organization said, referring to a July 27 statement from Michael Surbaugh, the Chief Scout Executive for the Boy Scouts of America, who apologized to anyone in the scouting community who could have been offended or alarmed by the political rhetoric in the speech.

“For years, people have called upon us to take a position on political issues, and we have steadfastly remained non-partisan and refused to comment on political matters. We sincerely regret that politics were inserted into the Scouting program,” Surbaugh wrote.

Trump lied about the BOY SCOUTS. A senior Scouts source says there was no call at all, let alone a call telling him his speech was the best.

Trump isn't unsuited as President just because he lied about praise from Boy Scouts. He'd unsuited because of his emotional need to do so.

Previous Trump To Golfers: “The White House Is A Real Dump”
Next Sessions Targets Affirmative Action At Universities