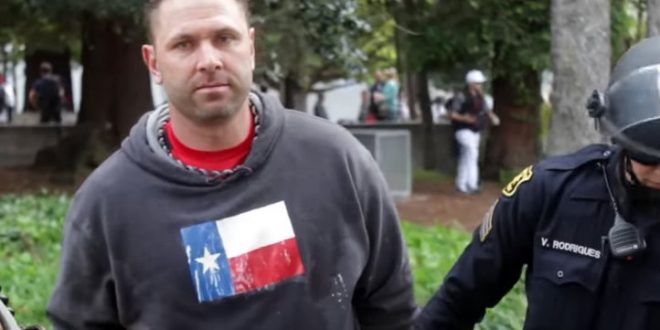 Alt-right, “American Nationalist” Kyle Chapman is facing a felony charge, now that the Alameda County District Attorney brought a case against him Thursday for allegedly wielding a lead baton on the UC Berkeley campus while violence broke out between Trump supporters and antifa counter-demonstrators, The East Bay Express reported. Chapman was reportedly seen striking people with the weapon during the chaos.

Chapman became an alt-right meme and minor internet celebrity after he was caught on video beating left-wing demonstrators, when a March 4 pro-Trump rally in Berkeley turned violent. He was given the nickname “Based Stickman” and quickly adopted it into his personal brand, launching a Twitter account, a fundraising campaign and a website complete with an online apparel store.

Chapman is one of four headliners scheduled to speak at a Saturday’s “Free Speech” rally on Boston Common, which has drawn condemnation and concern from public safety officials in the wake of the deadly violence at a white supremacist rally in Charlottesville, Virginia. Chapman was charged with possession of a billy club by the Alameda County District Attorney, according to charging documents reviewed by MassLive. The charge carries up to a year in jail.

To the Alameda county D.A., I’m ready to go to jail for this movement. I’m ready do do a lot more than that….. https://t.co/vzCxYsZhyT

Many of the neo-Nazis who were in #Charlottesville have worked closely with @BasedStickMan_; he is bringing some of them to #Berkeley 8/27. pic.twitter.com/QHXbmOgkYB