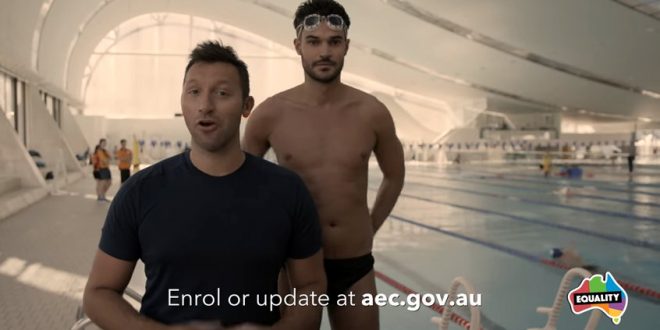 Ian Thorpe and his partner Ryan Channing have released a new video urging Australians to vote in next month’s postal plebiscite on whether to legalise gay marriage. The Olympic swimming champ is making a last-ditch effort to get Australians to update their electoral roll details before the list is finalised this Thursday ahead of the postal ballot.

In the video, he challenges Channing to swim 100m in the time it takes to update his details online. “If you support marriage equality you need to enrol to vote or update your details by midnight August 24,” Thorpe says.

Thorpe, who came out in 2014, has won five Olympic gold medals, the most by any Australian. A poll released yesterday shows that 67% of Australians plan to enroll for the plebiscite and that 63% plan to vote yes.