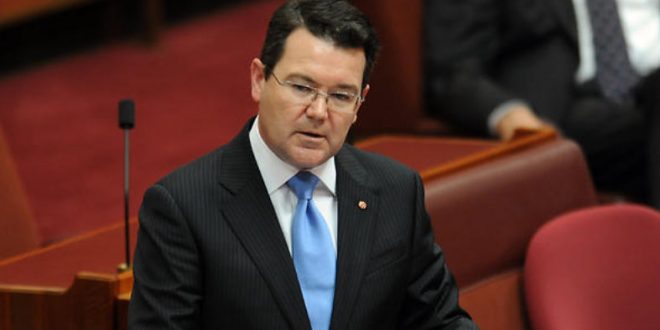 A private members’ bill, supported by Dean Smith [photo], Trent Zimmerman, Warren Entsch, Trevor Evans and Tim Wilson, has been circulated ahead of a special party room meeting on the issue in Canberra on Monday afternoon. The legislation would allow two people to marry regardless of their sex or gender.

It also would protect all religious ministers and civil celebrants from legal action if they refuse to marry same-sex couples, and covers service providers – such as bakers, florists and photographers – if they can prove their business is linked to a religious body.

“It’s a strong bill. It’s a bill which is designed to allow same sex couples access to civil marriage, while respecting the religious protection of marriage. So this is a bill which we hope will gain support, not only from the government partyroom, but indeed from the entire parliament.”

A Liberal senator says the death of Lindt cafe manager Tori Johnson made him support gay marriage. Mr Johnson was murdered at the end of a 16-hour terror siege in December 2014, leaving behind his long-term partner of 14 years, Thomas Zinn.

West Australian Liberal senator Dean Smith, who is also gay, said the death of the 34-year-old Sydney cafe manager convinced him of the need for gay marriage. ‘His life was taken in such a tragic way,’ he told the ABC’s Insiders program on Sunday.

‘That moved me and it just reinforced my resolve and I came to the conclusion very quickly, with great clarity, that it’s now time to legislate by parliamentary vote same-sex marriage in Australia.’

A Bill that will allow two people to marry, while at the same time protecting religious views about marriage in Australia. pic.twitter.com/MM40b6FNRj

Details of private member’s bill that would back same-sex marriage have been released. @LCalcutt explains. #9News pic.twitter.com/dEPhra0hFy

What do we want? Marriage equality! When do we want it? Now! pic.twitter.com/Oyq50ZwRcq