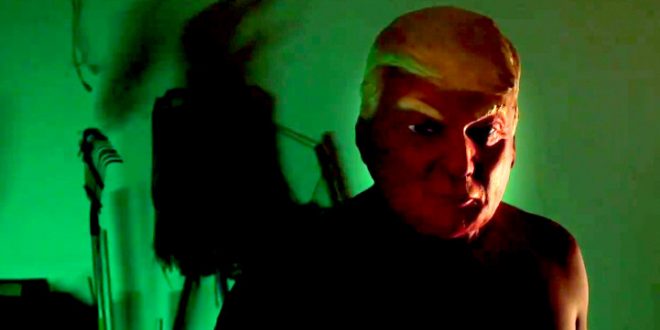 The opening credits for “American Horror Story,” which – in keeping with the anthology format of the show – change every season, always lay clues to the overall theme and mystery of that installment’s plot.

For “American Horror Story: Cult,” the biggest hints to glean deal with how the recent political climate with come into play in the eagerly anticipated seventh season.

Continuing with the “hive” theme implied by much of the teaser imagery, the credits feature dark close-ups of bees swarming over a surface and crawling out of someone’s skin, as well as characters dressed up in the aforementioned Donald Trump and Hillary Clinton masks.

Ghastly clowns are visible riding a carousel, there is a magician pulling a bloody object out of a hat, and an American flag dripping blood is featured.

Watch it begin. Witness the opening credits for #AHSCult. pic.twitter.com/7X3Cy9W7DV

Previous Trump Spiritual Advisor Paula White: When You Oppose Trump, You Are “Fighting Against The Hand Of God”
Next Four Arrest Warrants Issued For “Weeping Nazi”