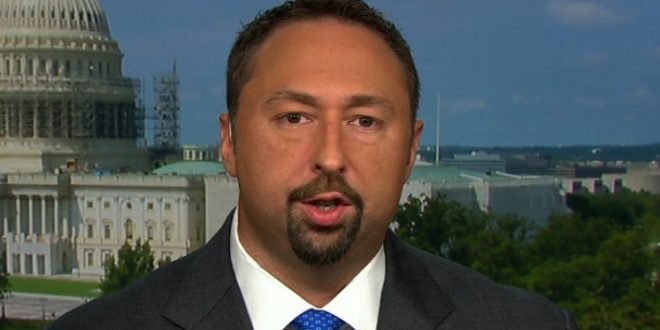 Page Six exclusively reported that Miller and Delgado went to a Las Vegas strip club with members of the media the night before Trump’s final debate against Hillary Clinton in late October. Miller confirmed the birth of their child on Wednesday.

In what feels like light years ago, Miller, who had been the chief spokesman for Trump’s fall 2016 campaign and presidential transition was tapped to be the White House communications director in December. But he lasted even less time than Anthony Scaramucci, and turned down the plum job two days later.

In a statement to the Post, Miller says he and his wife are “excited” about the news of his new son. OK, then.

Dear friends: Beyond thrilled to share with you that I’m now the proud mother of a beautiful son (!), William!!! Born 7/10

Hi @PageSixEmily At least 5 wrong facts in your article. Really bizarre. And you never attempted to contact me by phone today. That’s a lie.

Love how the Page Six article implies it was a “Vegas” love child. Hm, no. (cont)

(cont.) The father and I were dating for two months (he was separated from his wife, he said, and had been since June.)

I also never “changed my number” (still the same number, so that’s a complete lie) nor “disappeared to Florida.” @PageSixEmily

And I’m not sure what Jason means that he and his wife are excited to welcome Will. Really? News to me. Let me shut up before I say more…

Weird, no reporter wrote about this, except Page Six. Did Jason Miller reach out to THEM? Weird how he even commented for the story, huh

Wasn’t my choice to discuss this but since Jason went to Page Six, I guess I now have to share. Story to @mckaycoppins . Stay tuned.